it would appear the more i fall for him, the more he falls away from me.

also, my mother has rudely ordered a brown leather sofa set.
hooray.
i get to sit on a dead cow when i watch t.v.

the joys of the gourock train.
when i work a sunday night, i have to get the gourock train to paisley, right?
well, last night, i was on the train and this neddy girl was shouting at some guy in the carriage behind me. and then she said something like "here, you were the wan arguin wi' me" and then the guy (who must've been like in his fifties and this girl was no older than 13) replied with "shut it, fatty". HAHA. by this point everyone in the train was listening in and started laughing. fatty. good one. then some other guy who was trying to stop this man from fighting with the girl was like "she's only got like 2 ounces of fat on her. i mean, look at me, now ah'm a fat bastard!"

on saturday, emma & myself went to emilys where we had a few drinks and watched black books and saw emilys new bunnies. then we went into town and met kirsty and russell and max in rg's. went to the cathouse and actually had fun there for the first time in ages seeing as they played good music!! (well, good music to dance to, anyway).

my work is so fucking boring. i actually felt like last night would never end. the band who usually play on a sunday had the week off and there were no customers in for two and a half hours at one point. shoot me.

hello my dear friends of the livejournal world.

what's been going on in my life recently?
well, i've finnished my first year of university. scary and yet i feel like this is where i should be. not that the course i'm doing is where i should be. i mean growing up. my life is moving on. anyway, i passed all my exams, hooray. and missed my fashion show. ehm. whoops. whatevs, it was only my kimono in it, next year, better stuff will be.
i've just been working away in the pub, managed to get a few more shifts. at least this week anyway.
i went down to chester for a few days to see my cousin before she went back home from uni to switzerland. met a lovely irish boy and have decided that is why i've never found someone i really like. i just don't like scottish boys! lol. i kid.
desperately want to move out as i feel i'm suffocating living here but money is a huge issue. as in, i have none.
yesterday was the strangest day in work. firstly, i was working my first double shift. i went in and the fire alarm was going off (there was no fire) so nick and i sat at the end of the bar whilst cindy tried to get someone to fix it, hoping that it would waste a few more hours at least so we wouldn't have to work. alas, come half one, the pub was opened. then, i was visited by so many people. there was kirsty and russell (which wasn't so unusual) but then my cousin gregory and his wife cheryl came in for a few drinks. and theeeeen later on, my friend yvonne who i used to work with in subway came in. haven't seen her in like three months. she quit subway too :) on a sunday night, we have two guys in who play an accoustic set. yvonne and her friends are in a jazz band so they got talking to the guys and during half time they played some songs. oooh, also, another two guys did a couple of songs during the break and OH MY. one of them was absolutely...wow. and then he started singing and i literally felt my knees disappear.
and then garyyyyy was in. and he was so impressed by the pint i poured him that he didn't ask for another :p


i shall post pictures for you in the next few days. i', sure you'll be thrilled.

and is it just me or are the automatic the nicest looking band. like, ever?

"she is a member of a gang called the emos, who are youths who listen to emotional rock"


rock school is so funny, it's just full of little emos. lolz.

I did a friends cut. Not because there was anyone I wanted removed from my list, I just deleted old journals or the people who never use theirs. I was getting a bit confused because I didn't have a clue who some of the people on my friends list were. Anyway, if I've deleted someone who still uses their journal, it was by accident and feel free to leave a comment and I'll add you again. I don't think I have, though. 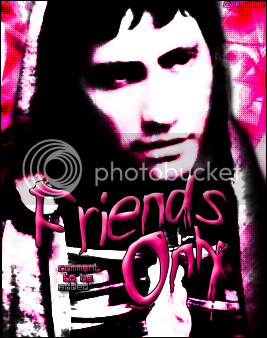